The conversations were probably the most tedious part of this conversion. A lot of cutting and pasting. But it really made me appreciate how powerful the IceBlink conversation editor is, and IceBlink has more flexibility in this area. One thing with regard to conditional based dialogue options, in IceBlink, they only appear when available for the designated character and the player has to select them, which makes it feel more like that party member is interjecting. In KotC2, it is really just a list of the responses available based on the type of characters in the party. The end result is pretty much the same.
Top

Like a fine clockwork, Dorateen - very impressive. You have gone the whole distance and it is a pleaqsure to see Hearkenwold up and running on Nexus Mods (using KotC2). Big congratulations

Dorateen wrote: ↑Mon May 03, 2021 1:54 pm The conversations were probably the most tedious part of this conversion. A lot of cutting and pasting.

I can probably make a conversion tool (like I did for NWN1 and NWN2) that converts the IB conversations to KotC2 format. I would just need to figure out the KotC file format and then it should be easy from there.
Top

Dorateen wrote: ↑Mon May 03, 2021 1:54 pm The conversations were probably the most tedious part of this conversion. A lot of cutting and pasting.

I can probably make a conversion tool (like I did for NWN1 and NWN2) that converts the IB conversations to KotC2 format. I would just need to figure out the KotC file format and then it should be easy from there.

Oh I don't think that's necessary. Just a minor gripe I had. I'm actually not a fan of automated systems, because doing it by hand gives me a chance to make corrections I might have missed, even working with convos I had written years ago. No doubt a tool like that would be helpful, I just don't think it is a priority.
Top

That was pretty easy. I added the "autumn" weather to the properties of a new area, and have a nice fog rolling in from the west with raindrops falling on the halfling's head. I can't wait to try the winter season in mountain areas, as well as the desert setting on the Asherim maps. 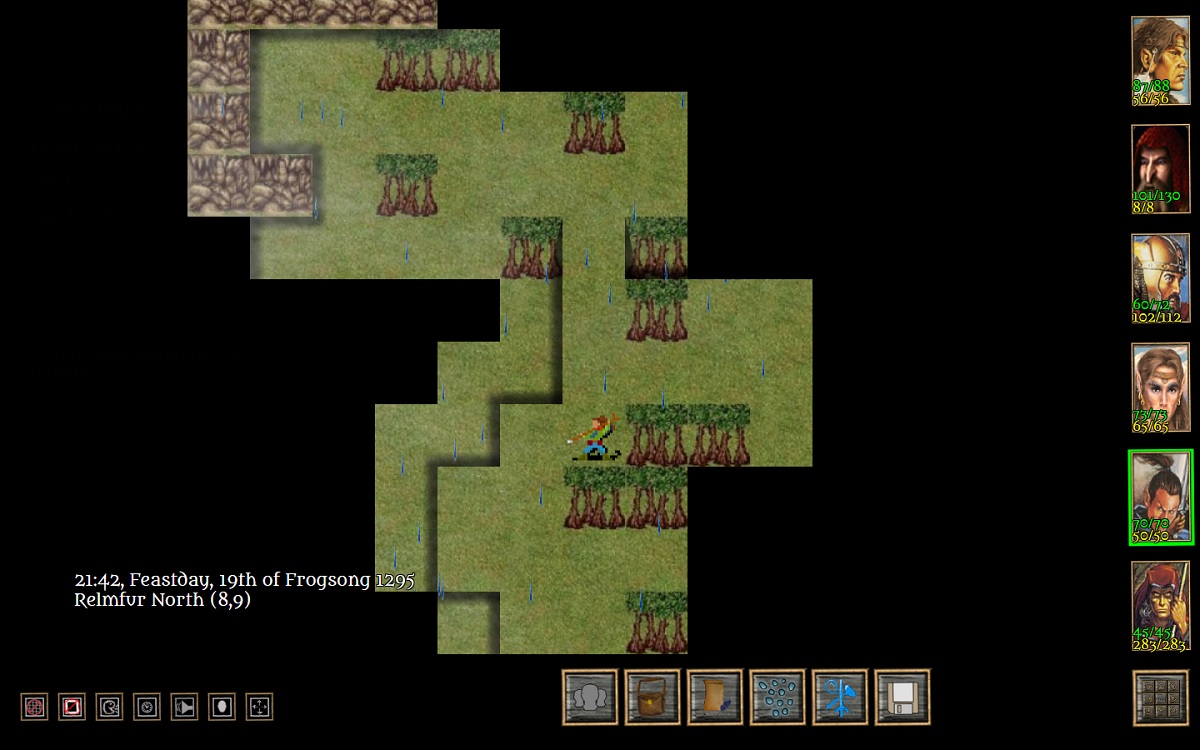 These changes will be in the 198 version, when it's released.
Top

Looks good! Nice to see it works with map pictures as well as tiles
Top

This is an important update as I have been working on the continuation of Hearkenwold in the IceBlink engine after a slight detour to make the module available for Knights of the Chalice 2.

The last thing I been building was the separate guild adventures available to the corresponding player classes. I have talked about before how it would be necessary for the player to join at least one of these guilds, for when the moment arrives to advance the central narrative. And this is why: 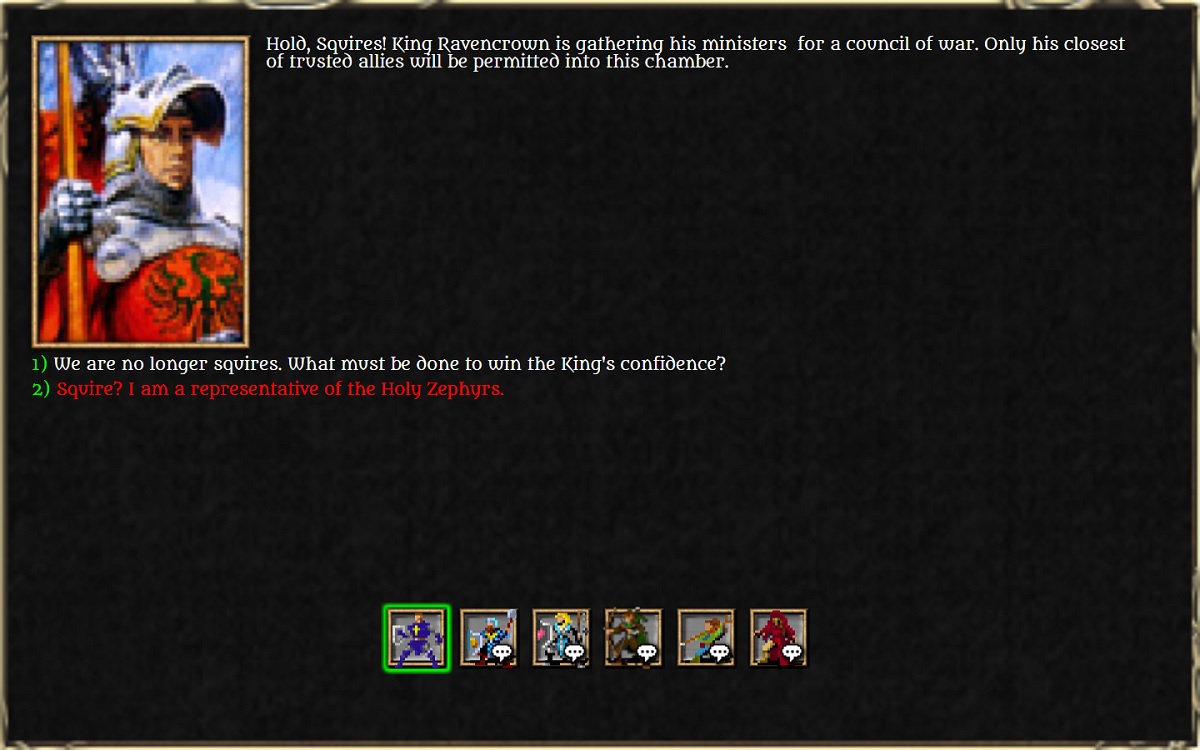 Yes, the King is having a council and only highly respected individuals are allowed. Or at least characters who completed one of the guild quests. Each party member who has such affiliation will have the option to express their credentials and thus enter the council room. 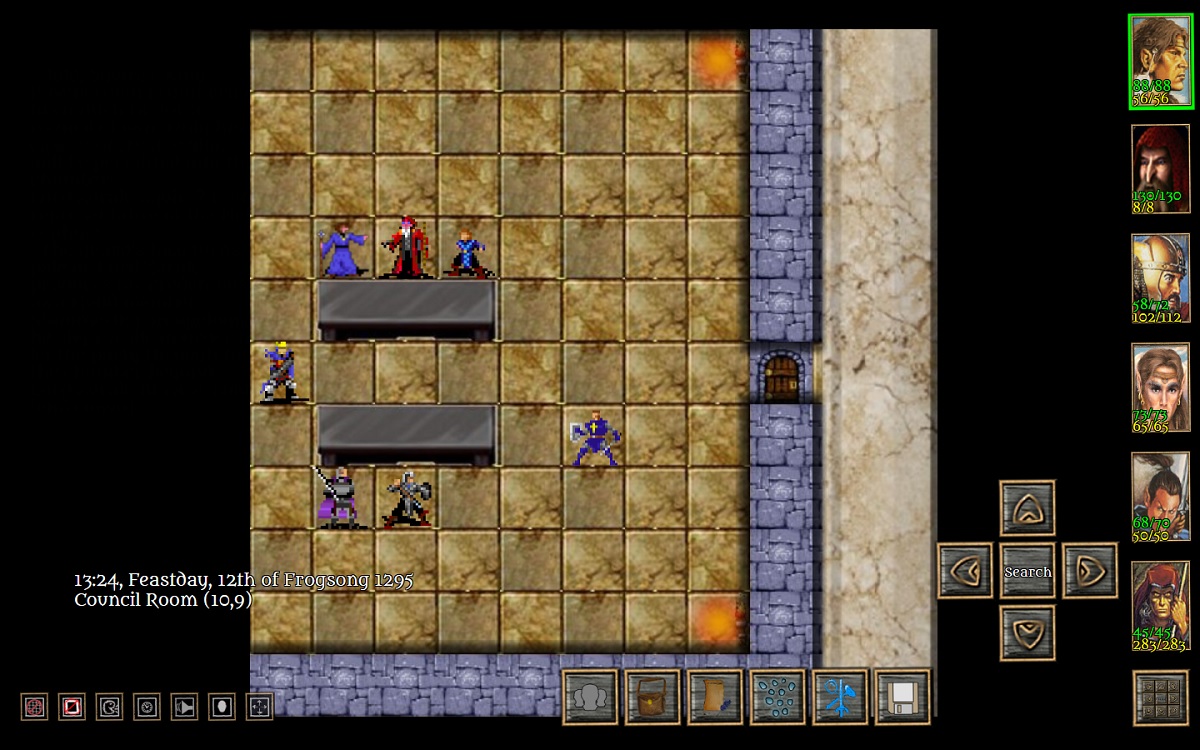 I am using some of the floor tiles from DungeonCrawl Soup that were made available and Pongo posted about in the other thread. I'm not sure if it is too much of a clash with the quality of the other graphics, but I think it looks nice.

Naturally, the new content I am putting together will feature new opponents to fight. Here is an example of a gargoyle mage, a monster with the toughness of a standard gargoyle, but the ability to cast spells on the party. 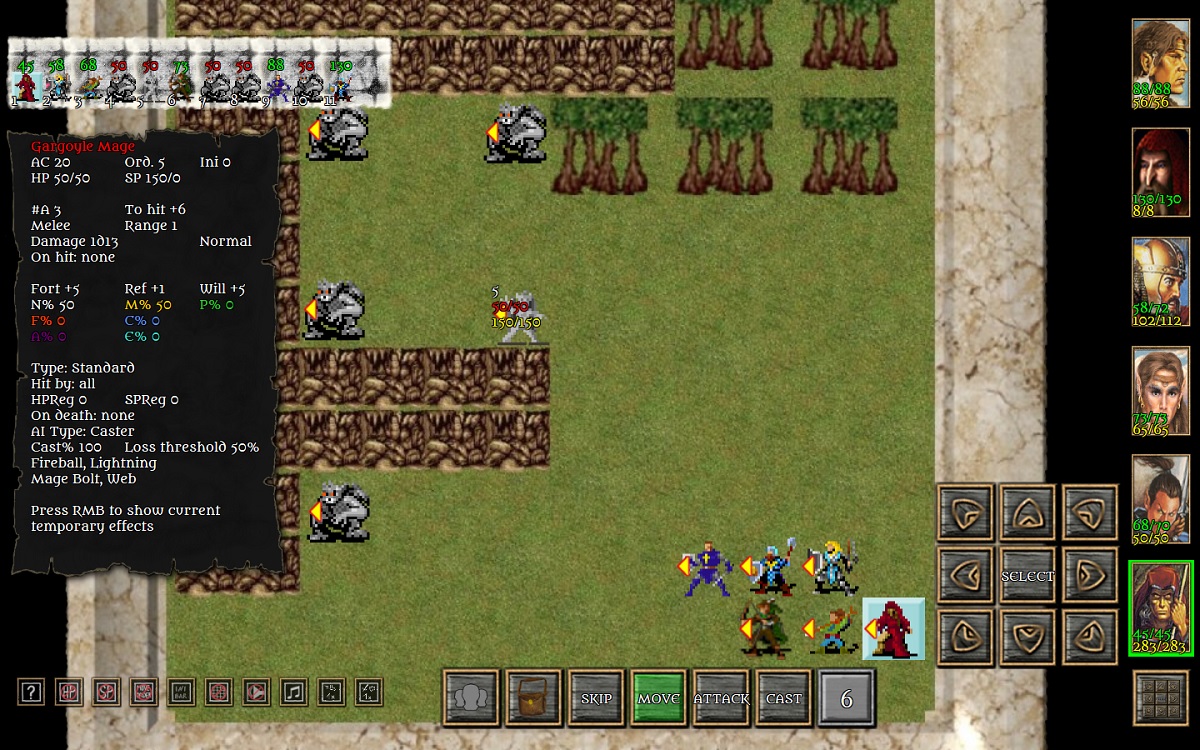 The tricky part is going to be due to the module's non-linear approach to design. I want to be able to create challenging encounters for high level parties, but there will also be areas that mid-level characters could access as well. In the end, there will be a mix of both. And if powerful parties stumble upon weaker foes in some places, that is just the nature of growing strong enough to dominate the enemies.

I was still working with builds 198/199 up to this point. But I will grab the latest version of IceBlink so I can start working with more of the new additions. I did however copy over the two weapon fight traits. To showcase this, I had our party's paladin pick up the trait at sixth level and then equip a short sword in his off hand. 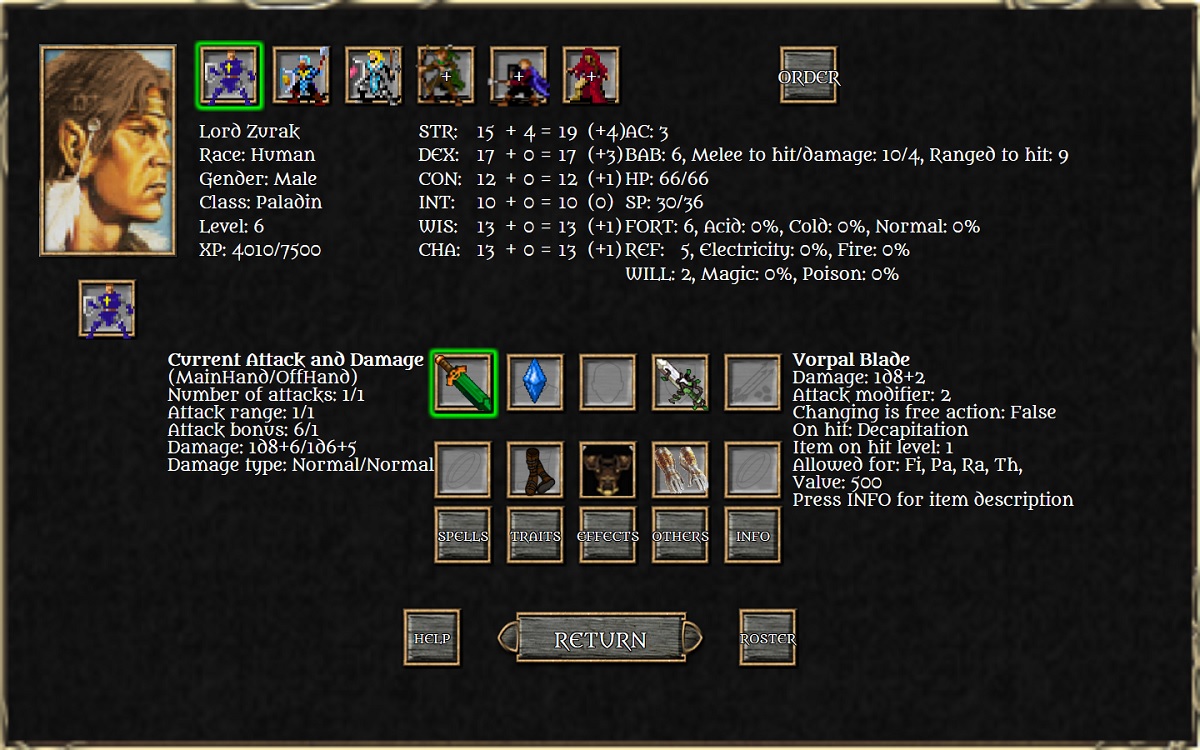 I also started using the weather effects settings. Just the deafults, which seem perfectly suitable for the outdoor areas. I made a gif to cycle through a few different zones showing rain, snow and a sandstorm.

The version of Hearkenwold that I upload next will be focused on continuing the main adventure path, as well as including one multi-level cavern dungeon. Again, some content will be exclusively post-guild adventures, but will then link up with the rest of the module. And other areas will be available to players who have not yet started the guild quests. I am hoping to finish by the end of the summer, although as always, these projections tend to slip away. I have so far created many of the outdoor maps and critical encounters. This month I started on the cave dungeon. If I can finish that, then it is only a matter of filling up the surrounding areas with content.
Top

Looks great! I think the new floor tiles fit just fine and look nice. The gargoyle mage looks tough. I think once we are able to add more smart casting (I don't think IB has it and IBbasic doesn't) that should add more complexity. Casters will be able to decide which of their spells would be most effective at the moment. The two weapon fighting for the Paladin looks good. Anyone can equip a second weapon in the off hand, but will take a huge hit to attack if they don't have a trait (light weapons also help). I love the GIFs (I need to learn how to make those). The weather system that Karl created is such a nice touch and looks wonderful as well plus all the animated tiles like water. It sounds like the progress on Hearkenwold is going well. Look forward to hearing more as things progress.
Top

This is looking great! What levels do you expect a 6-member party would reach by the end of the next expansion?
Top

Thank you, slowdive and cartons.

Hard to say yet what final levels will be obtained. The most advanced character I have is a level 10 thief with 18,185 experience. This is after completing all the guild quests. It takes 22,000 xp to reach the next level. So I think for other characters, it will probably be around 9 and 10.
Top
Post Reply
185 posts