Nice update! The Dungeon Crawl Soup floor tiles look great, and the weather effects are nice as well - I hadn't seen the sandstorm one before, it's pretty atmospheric.

I'm looking forward to trying to get the confidence of King Ravencrown. One of the things I particularly like about Hearkenwold is the way you're not thrust immediately into epic events, you've captured the fun of lower level adventuring and exploring really well. When I finally get to see the king it's going to be pretty satisfying - I'll feel like I earned it!
Top

Pongo wrote: ↑Sun Jun 06, 2021 12:59 pm you've captured the fun of lower level adventuring and exploring really well. When I finally get to see the king it's going to be pretty satisfying - I'll feel like I earned it!

Thanks, Pongo. Low level D&D is something I enjoy, so it is fun building up those areas. It is interesting that after all the years working on Hearkenwold, the player will finally get to see and speak to the King for the first time.
Top

In the meantime, I uploaded a couple of new videos showing some more combat from Hearkenwold in the Knights of the Chalice 2 engine. This one has the party fighting a trio of witches and their animal associates:

Saw both videos (since I subscribe to your YT channel) and they are great!

I think all the passwords are messed up at the moment. It may be a PHP version issue which I'll need to look into.
Top

Thanks, I am back in now under the old account. So it was DorateenIceblink had a short run of just one post.

Glad you enjoyed the videos. I'll be posting an update for Hearkenwold in Iceblink next weekend.
Top

That’s great! I’ll try and have some bug fixes out before then… at least the crashing type as part of a hotfix.
Top

Last month, I was working extensively on the underground dungeon complex that will be the Khrystos Caverns. To give a little background lore, this is the cave system that the Dwarves of Hamhock excavated hundreds of years ago. They set up a mining colony here, not far from their Mountain Halls. However, it was these caves where they unwittingly awakened a demonic spirit, which sent fiery destruction upon the Dwarf-King and his people. And while over the centuries, the dwarves did win back their mountain halls, the caves remained infested with monsters, a stronghold of the enemy.

I am trying to capture the sense of twisting tunnels, and a menacing atmosphere. It is a cross between former dwarven territory that has been taken over and occupied by gargoyles and goblins. In terms of design, the caverns are multi-leveled with over a dozen interconnected maps. I'm balancing it around a 5th/6th level party again, but some fights especially with the new features, are possibly harder and could be fun for more advanced characters.

Here is a screenshot that shows some old statuary, and a not so pleasant well. A number of directions are available for the party to go from this location. 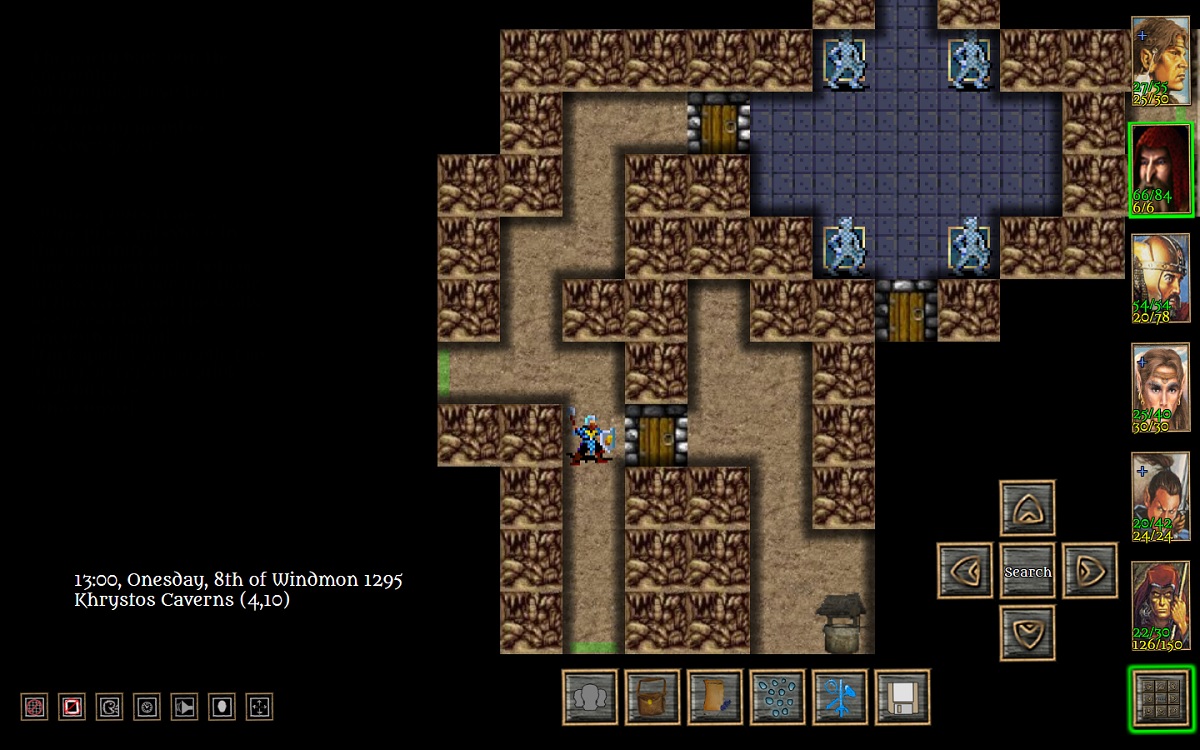 One of the new monsters I am introducing is a Giant Lynx. It is a spell caster, and a beefy back up to more melee orientated enemies. 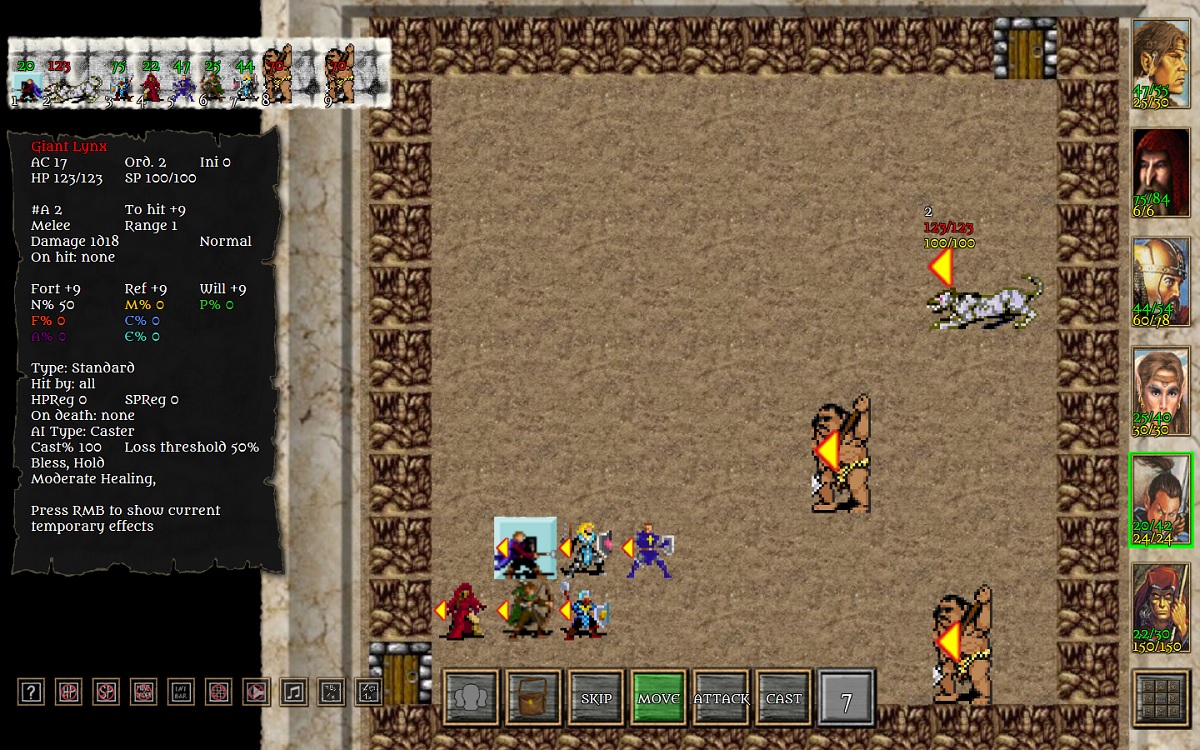 As I have been working with build 200 of IceBlink, the critical hit mechanic is in. Always fun when our party does the extra damage. Not so fun, when an ogre smashes our paladin, as indicated in the combat log below. 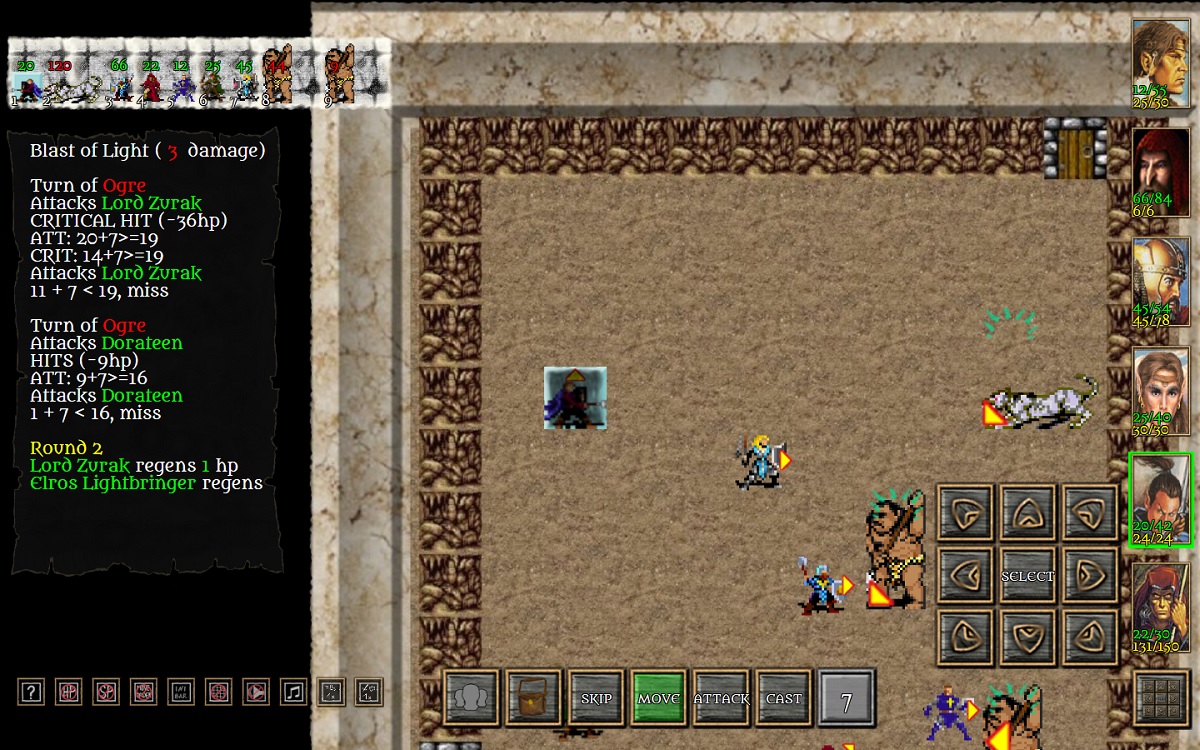 I have been merging a bunch of spells from the Proving Grounds test module, which are a much welcome addition. Working my way alphabetically, so I have gotten from Barkskin to Haste. Although I also added Vampiric Touch, because I really wanted that effect for a new creature. And I finally have Dimension Door as a special spell that only wizards can learn by completing a task.

I am also copying over the neat, more pixelated spell icons. Here is a look at a wizard's spell selection screen. 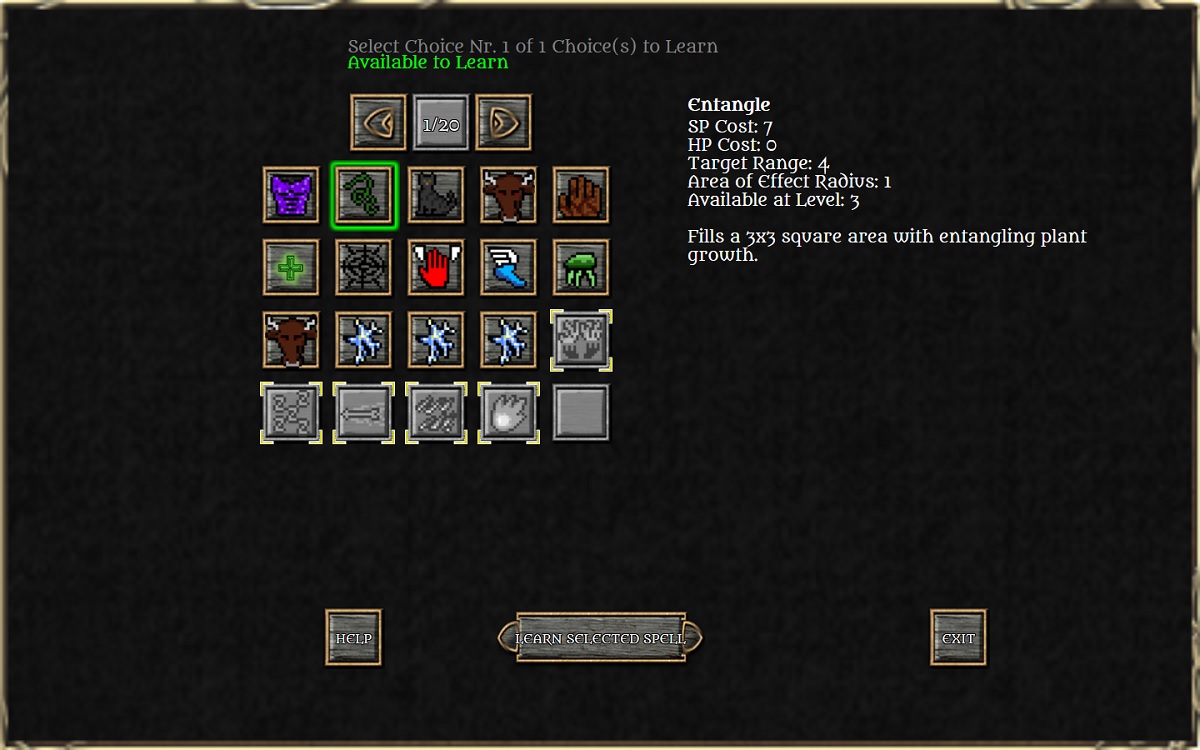 And finally, here is the Entangle spell in action. 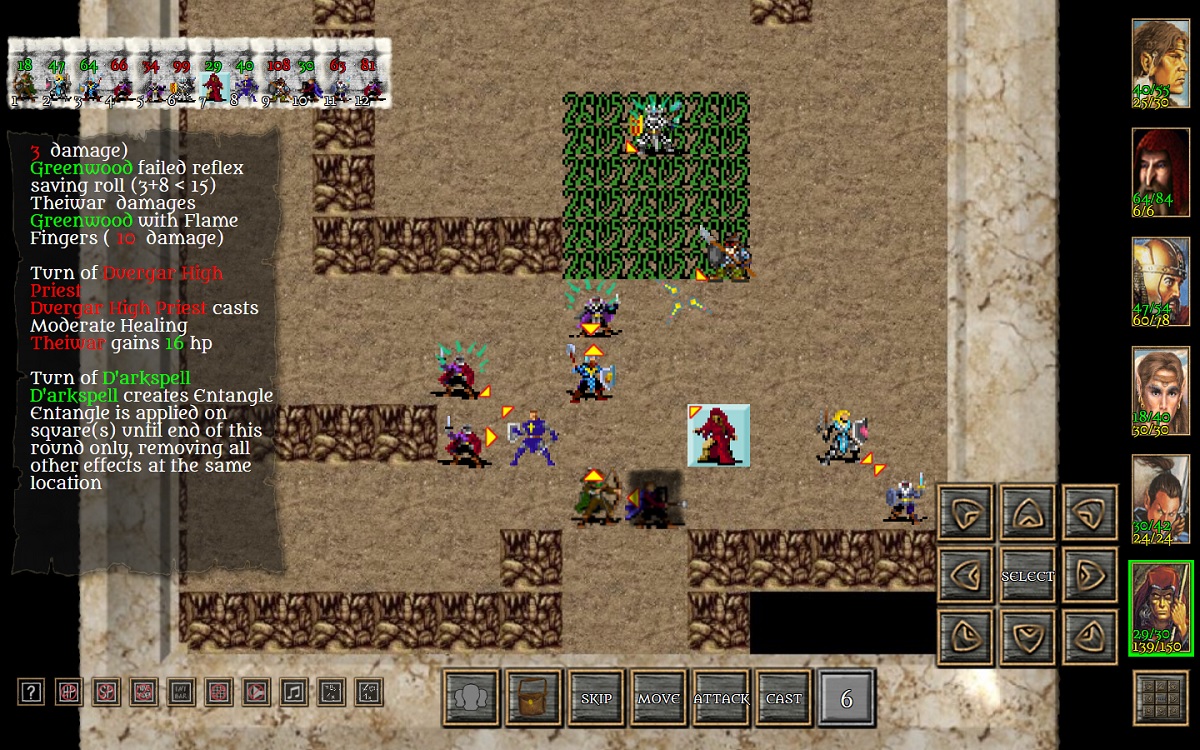 Just to recap, the next release of Hearkenwold is built around two paths. There is the continuation of the main narrative, after the guild quests and kicking off with the King's Council. Then there is the Khrystos Caverns, which can be accessed at any time, although lower level parties should be advised to tread carefully this domain. I think I will have the Caverns complete this month, and then it is filling up the surrounding areas for more interesting exploration. The summer doesn't end until mid-September, so that is what I am targeting to finish this upcoming chapter of the campaign.
Top

This looks so good Dorateen. I'm sorry to hear about your Pali

, but I guess it is only fair that they get luck sometimes too. The maze looks fun and I suspect I will get lost a few times

. I'm not sure about the giant lynx, shouldn't we try talking to it first (I remember that cartoon from MM1 as well)? All the new spells and combat features will be very welcome. Do you have two-weapon fighting traits, light weapons, and finesse weapons set-up in Hearkenwold? If not, no problem, I can modify the relevant files after the next version of Hearkenwold is available. Yeah for September-ish.
Top

Thanks, yes I have the two weapon fighting trait in. I still need to do the finesse trait and light weapon properties. I'm sure it will be no trouble, I just need to get around to it.
Top

Dorateen wrote: ↑Sat Jul 03, 2021 3:59 pm Thanks, yes I have the two weapon fighting trait in. I still need to do the finesse trait and light weapon properties. I'm sure it will be no trouble, I just need to get around to it.

I was talking more about finesse weapons. Finesse weapons use dexterity instead of strength for the attack roll modifier. All items are defaulted to false, so you don't have to have any weapons use the finesse system if you do not want to use it. There is also the ability to have traits that allow you to use dexterity for attack and damage if it is greater than strength, but that ignores the weapon's finesse setting. So there are a few options depending on what you want to use.
Top
Post Reply
190 posts