It's a new year, and I've just posted the latest version of Hearkenwold for Knights of the Chalice 2 on the nexus page.

This brings both modules now into alignment. And here are a couple of more screenshots showcasing higher level content. 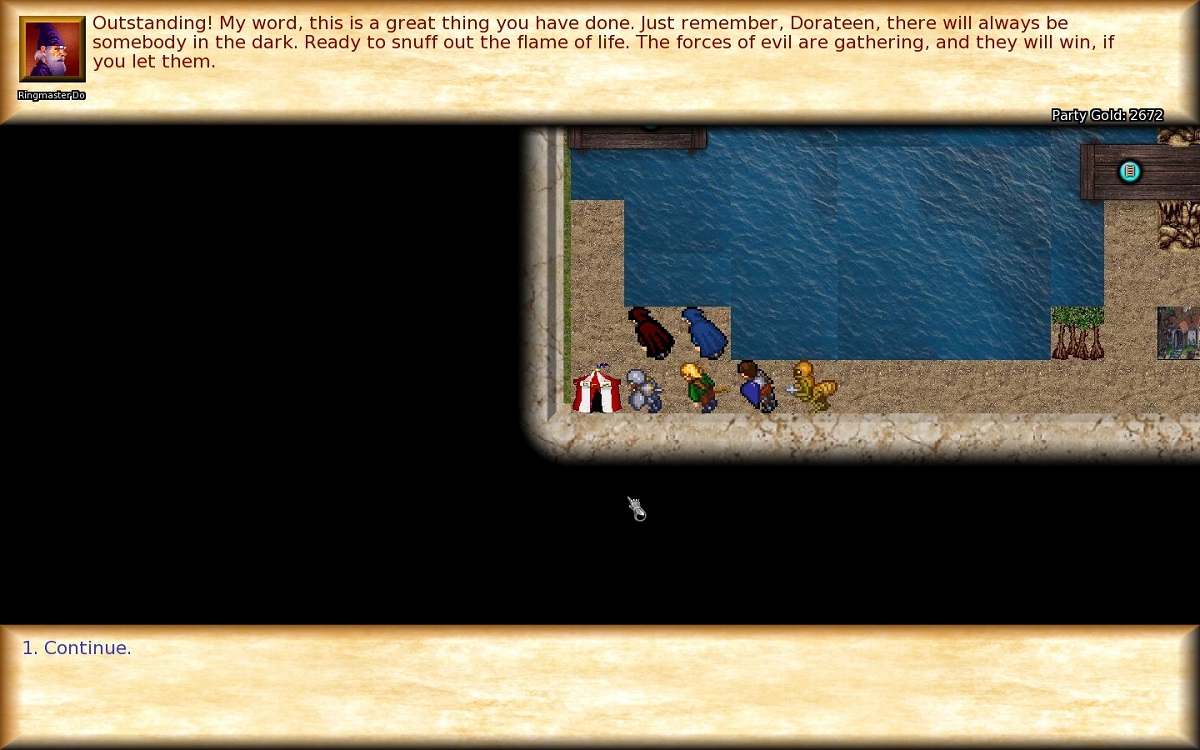 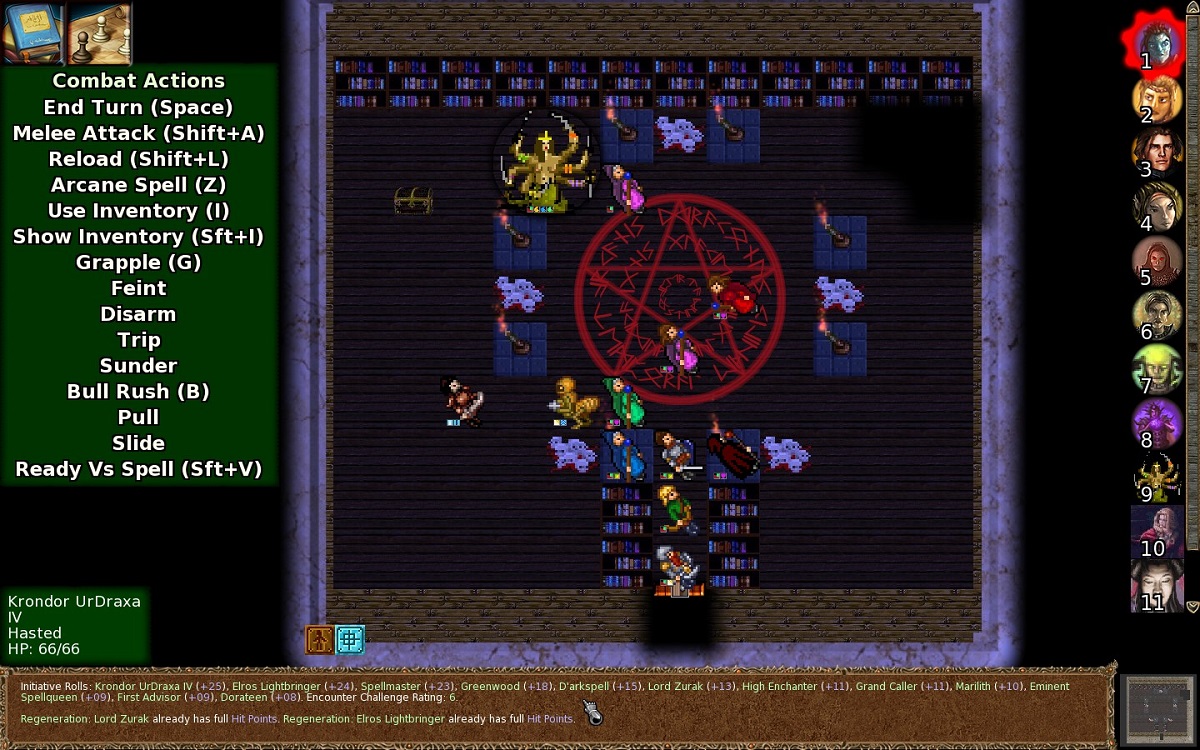 Now the question becomes, where do I go from here with returning to the IceBlink engine. I've been giving the matter some thought, and while the obvious answer is to just keep building where the last update has left off, I also had the notion to rebuild the NWN2 module I made called "Edinmoor", and place it into the Hearkenwold campaign. It's an adventure designed for 7th to 9th level characters, if I recall, and I would have to make some adjustments to fit the custom setting. But the advantage is, the content would be able to be accessed by players at anytime as soon as they stumble across the associated areas. On the other hand, if I continue the main adventure arc, which I do have plans for, that represents content only available for players who have made it so far and reached that point. I also found that it feels a little linear to some degree, following the story branch. Where as an inclusion of Edinmoor into the campaign would just be more content as part of an open world. It also has the advantage of letting me work from a blueprint, a preexisting campaign that I have already finished, and would probably be something I can have out this year. But to continue the adventure into new areas, will likely take me longer, even though I have a rough outline about what I want to do.

So I haven't made a decision yet. I will most likely being fixing bugs over the next couple of weeks. But I think by the end of this month, I'll have a firm idea about the direction to take Hearkenwold. Of course, I would appreciate any feedback: would players want to have new adventure available sooner, which their party can tackle as soon as they are ready? Or would it be better to keep pushing the main narrative forward?
Top

Congrats on the KotC2 update! I for one would love to see Edinmoor incorporated into the Hearkenwold campaign so I would vote for that option. I remember well when it was released for NWN2 and I believe you had a turn-based version as well, right? I did create an import tool that imports a NWN2 module (also imports an IB module) into IBmini, but I need to update it to IBbasic format. I could probably do something similar to IB if there was enough interest, but I know that you prefer doing it manually as this allows you to do checks and review the content in detail.
Top

Good memory, slowdive. I had been playing around with a turn-based mod for NWN2 and was attempting to use it in what would have been a sequel called "Sons of Edinmoor", but that project didn't get too far.

Another consideration is for the past few weeks I had been testing battles against much more powerful enemies, which can be brutal in KotC. It is fun, but I find 7th level encounters to be more of a sweet spot I enjoy for D&D. So I'd welcome the opportunity to go back to that scale of difficulty. I'm leaning closer to having a look at Edinmoor as a keep and surrounding areas that would be placed on the eastern fringes of Hearkenwold, near the mountains.
Top

Well done Dorateen! I'm always impressed with how quickly you make progress, given you're building in two separate engines.

I haven't caught up with the new content yet, but for what its worth I'd also vote for Edinmoor to build on the open world feel.
Top

Thanks! Edinmoor it is, then. One final consideration for me was that the keep of Edinmoor functions as a settlement of sorts, with merchants to interact with and new leads for the player to follow, or not, if they choose.
Top

I'm in the middle of a blizzard today, so I decided to upload a new video of Hearkenwold in Knights of the Chalice 2. This one is from the paladin guild adventure, where the party will run into a rival party of gnolls.

Great video! That was a tough battle and one of the nastier gnoll encounters I've seen. Stay safe in that blizzard and I hope the power stays on.
Top

Thanks, slowdive. All good here.

The key to how that encounter plays out comes down to initiative and party positioning. Some of the gnolls can cast web and stinking cloud, and if they can get those off before the player has a chance to move, it is pretty much game over.
Top

As promised, I've been busy working to convert the Edinmoor module I made for NWN2 into new content available in Hearkenwold. I had started building Edinmoor shortly after finishing the Storm of Zehir expansion, and one of main objectives was to dig into the new party chat style conversations. As I have been working through these dialogues and how they were constructed, some of them go fairly deep with branching options based on character attributes, and they can take encounters with NPCs into wild directions. I even started to wonder what I was thinking, when the first chat with a local merchant could cover a variety of topics. 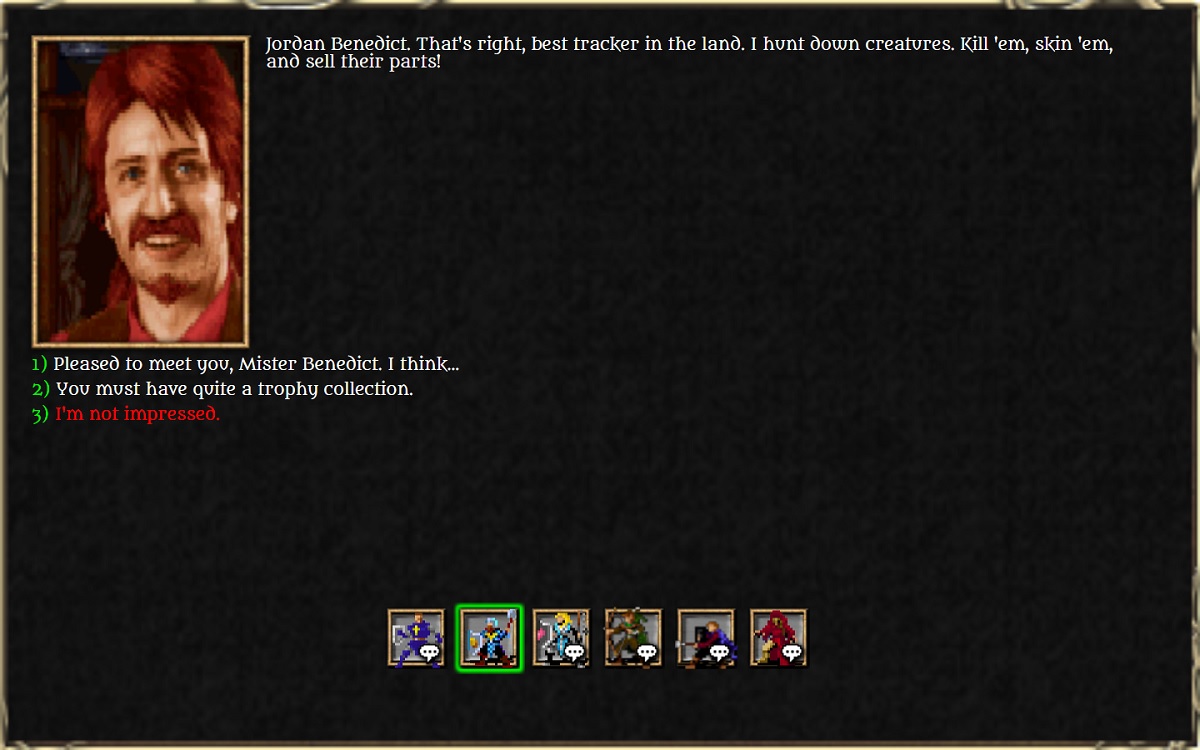 The original Edinmoor adventure was designed for a 7th level party and finishing around level 9 or so. In Hearkenwold, it will be accessible much earlier, leaving it up to the player how far they want to investigate leads and if they can handle the dangers. For example, the wolves near Edinmoor are of the Dire variety. 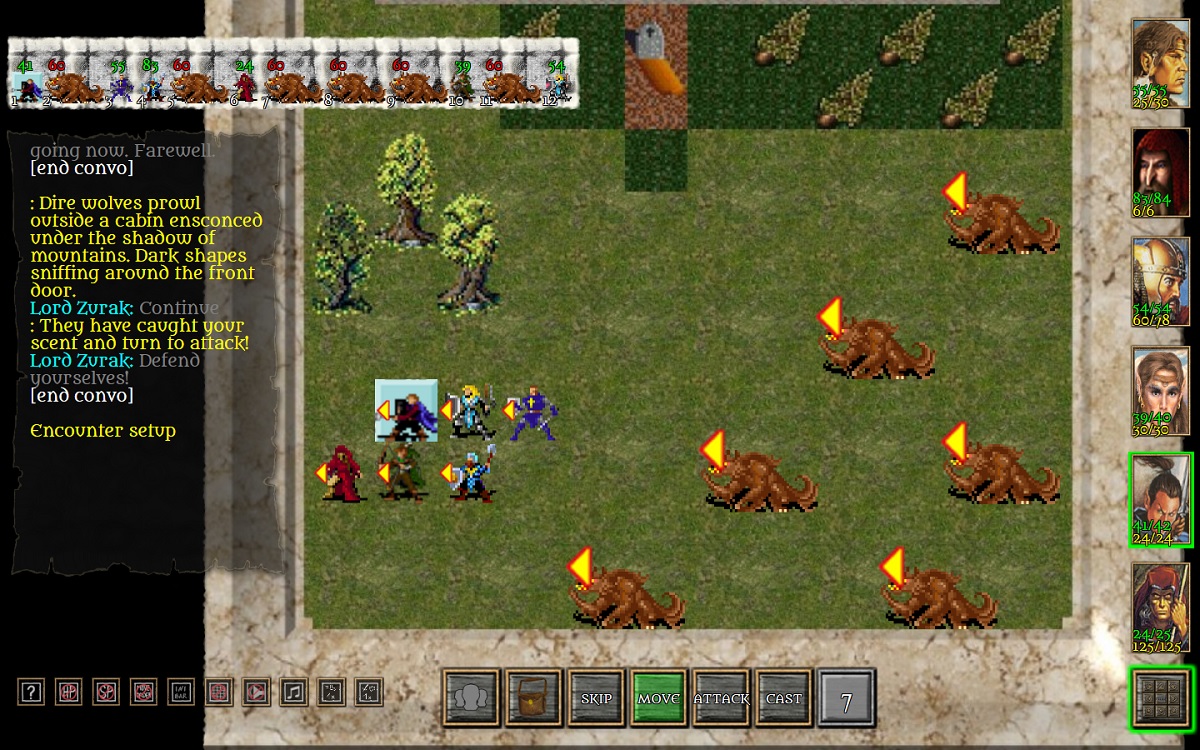 Here is a first look inside the keep, also referred to as Edinmoor Court. The place is described by the locals as a "lyrical" hold, a settlement welcoming of artists and musicians. Of course, the hook for the adventure suggests something sinister has happened disrupting the peace. 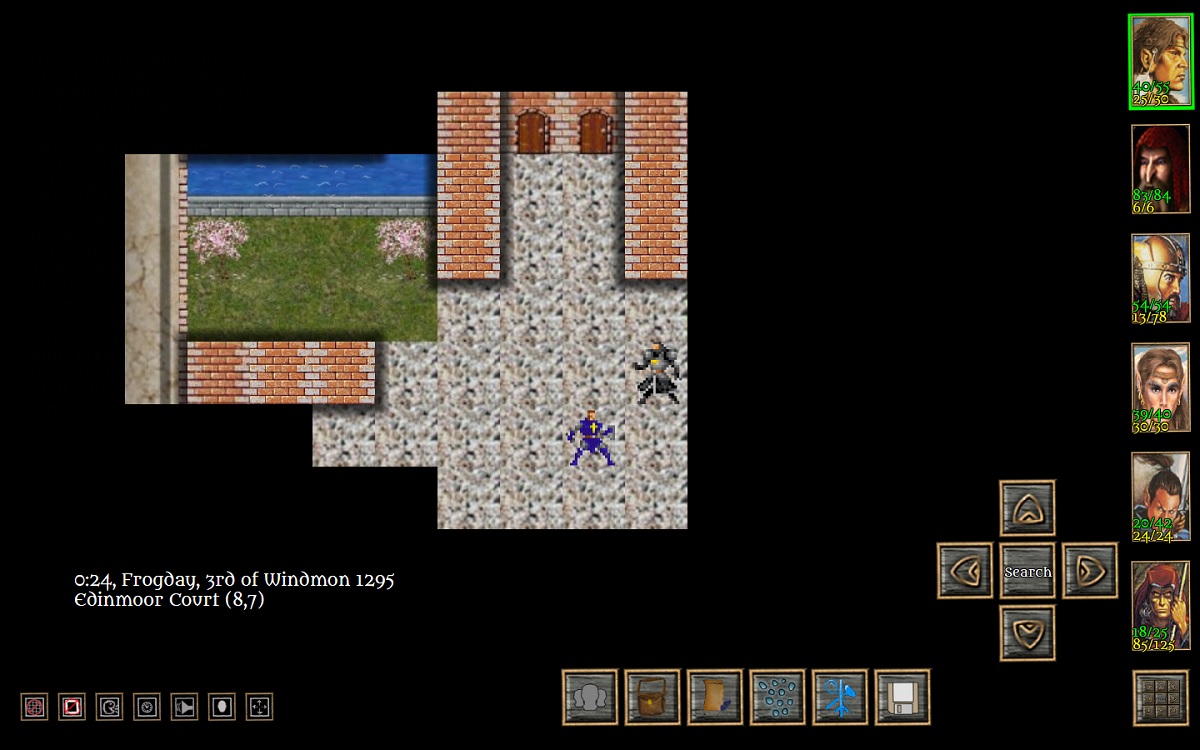 Another merchant is a tailor who sells fine clothes. I've had to stock his inventory with suitable merchandise, although most adventurers would probably not be interested in the selection. Still, these outfits could be a viable alternative to wizard robes, until such characters find something better. 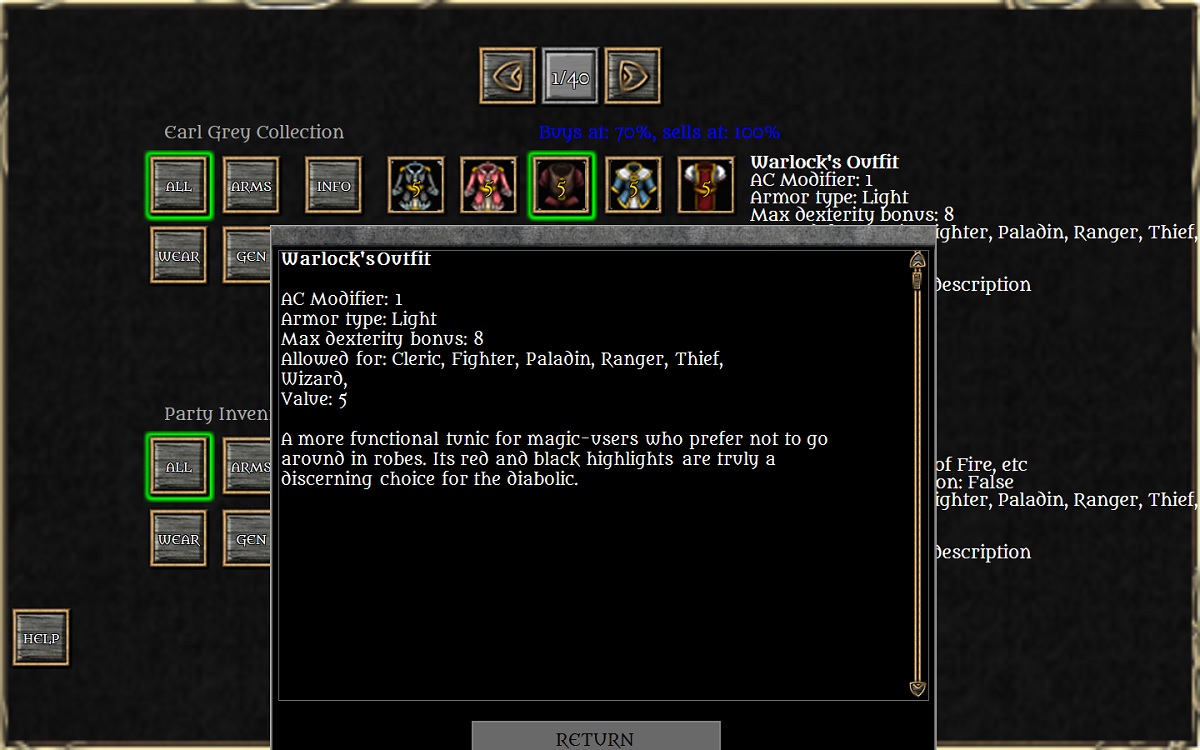 And one more screenshot, this has a couple of new enemies: Dark Dryads with the ability to cast barkskin, and entangle as well as sleep. 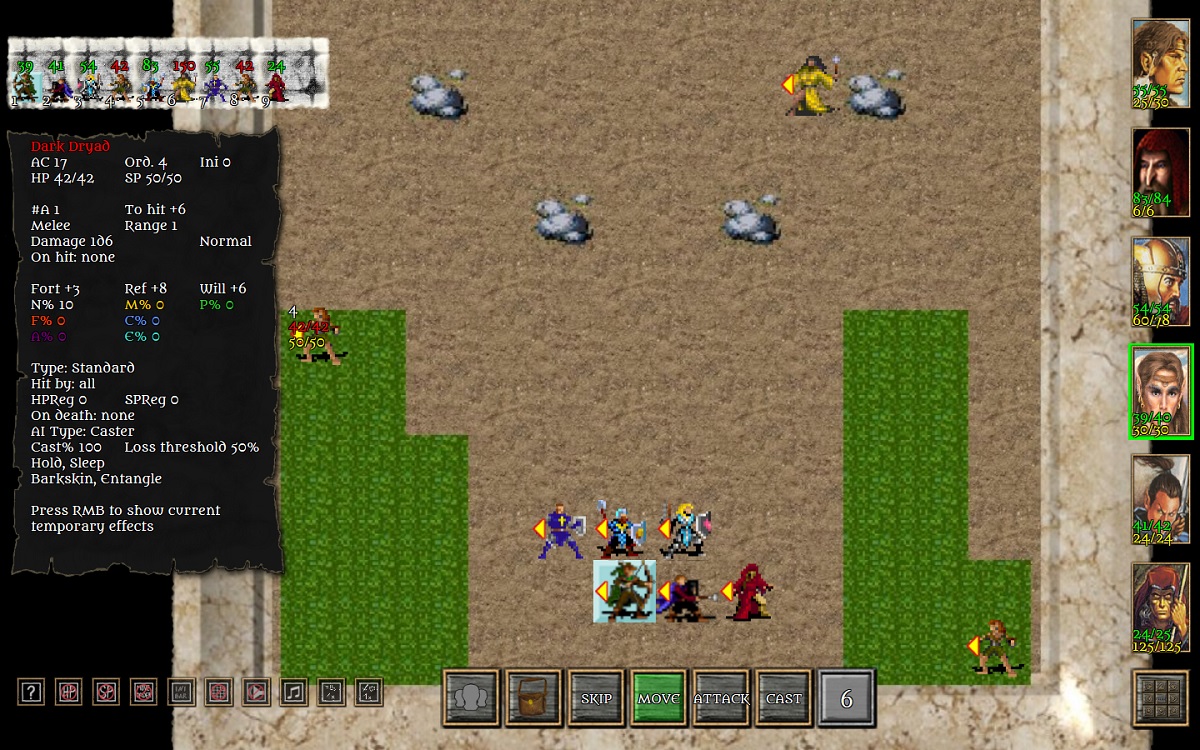 I will be trying to finish up by June in order to release the next version of Hearkenwold for IceBlink. I've got a few more dungeons and an outdoor area to build. Projecting to take about a month for each. As always, it is just an estimate, we will see how it goes.
Top

Looks like you are making great progress with Edinmoor already. I like the idea of lots of branching options as a player, but it is a ton of work as a builder

My wizards will be happy with the robe selection there. I also like the idea of having the option to enter the Edimoor content a bit early, but I probably won't do that (just like I don't go down stairs in castle hearkenwold to visit that party